Back to all posts

It would be fair to describe progressive metal musicians as nerdy. Case in point; pulling together passages that are as calm and thoughtful as a downtown coffee shop, or as blistering and energetic as the intro to outer space anime.

With these qualities, Edmonton’s Sleeping In Traffic has been busily establishing itself as an elite progressive, prog-metal act.

Guitarist Greg Turner, bassist Ryan Berehulke, drummer Andrew Bateman, and multi-instrumentalist and vocalist Cory Bosse are an ‘everything and the kitchen sink’ sort of band that finds a way to blend it all into one sleek and cohesive package. Saxophone, trumpets, organ, and a meticulously crafted light show round out Sleeping In Traffic’s musical ambition and technical prowess.

“The one thing that drew me was that it was metal music, but that singing was allowed,” Bosse says. “I’d been in bands before where … it was death metal and there was just no singing, just not allowed. Then when I got there, it was really was an environment of anything goes. If you have an idea, throw it on the table.”

It’s that creative freedom that allows Sleeping In Traffic to work with heavyweight and sometimes tricky ideas. Fermi’s paradox (the argument that within the multiplicity of planets we should’ve found aliens already) and hypnagogia (the psychedelic state between wakefulness and sleep) are just two of the complicated topics that the band has tackled musically.

Sleeping In Traffic’s full-length concept album, Feminism, was released in March and delves into broad and complicated aspects of the album’s namesake.

“It was primarily important to take my position of privilege, as the album discusses … which is basically I’m at the top of the hierarchy, minus class. I’m a straight, cis, white male. I’m middle class. I’ve never faced an obstacle in my life in comparison to some people, so I have the resources to do something like this,” Bosse explains. “Hopefully I can talk to other people like myself, who may not have been exposed to the kind of things I have, to try and bring them in here and better understand how we can affect people’s lives.”

Recorded at Two Bodies of Water, The Audio Department, and Bosse’s basement, Feminism has been a huge undertaking. With all the effort, sincerity, and attention to detail that goes into the music, it’s perhaps a bit unfortunate that the band is taking a hiatus between live performances. Even so, Bosse is confident that Sleeping In Traffic will press forward despite any potential complications.

“Our drummer is moving to Victoria and we’re going to dive into the process of making two short albums. Long EPs? Whatever you want to call them, I don’t really care about the terminology,” laughs Bosse. “We’re anticipating being done the whole product next spring. We probably won’t be playing another show until then, not least of all because we have to make a conscious effort just to get together and practice. We have to fly the drummer in.”

Since both Bosse and Berehulke are both studio engineers, the plan is to send pre-recorded tracks back and forth to Bateman and close the provincial distance. In a sense, this is just one more change in a band that has defined itself by change. The music, the themes, and even the members themselves are part of the experiment, and for Sleeping In Traffic fans, you should already know you don’t get the same thing twice.

“The beauty of this band is we don’t really talk about the future,” says Bosse. “We just talk about what the next step is. It’s great because nobody has any delusions of grandeur. It’s not like ‘how do we get famous?’ It’s more like ‘what do we do next?’ Keep pushing forward, and down.” 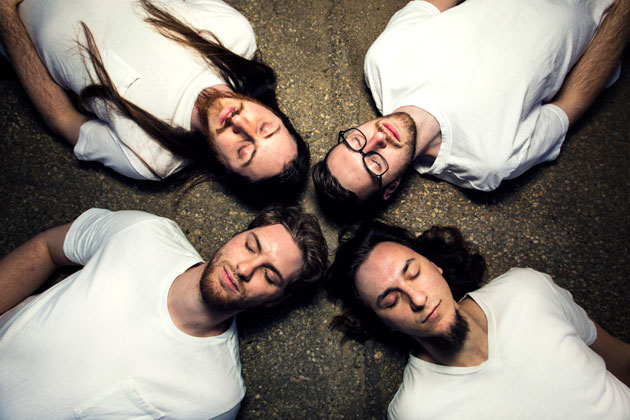