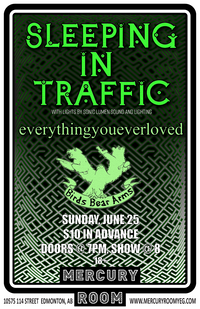 Sleeping In Traffic with everythingyoueverloved and Birds Bear Arms

SLEEPING IN TRAFFIC Sleeping In Traffic is a band whose artistic vision is built around the concept of change. Nothing in the band's music is intended to remain static. Each album and performance brings new adaptations and innovations; always playing with the sonic possibilities. The band consists of four members, each with their own unique and eclectic musical tastes which influence their contributions to the band. Their most recent album, Feminism, is a guitar-driven hard rock/metal concept album that borrows heavily from ska, jazz, pop punk, and classic prog rock.

“The 9-track record comes with a focused story-telling, remarkable songwriting and with an offer of something that separates them from the bigger part of the prog gang. The band is not shy to explore within pop, indie rock or alternative and fuse these elements with sound-defining progressive rock and metal influences.” - Darryl Weppler (Prog-Sphere)